Way Of The Dragon 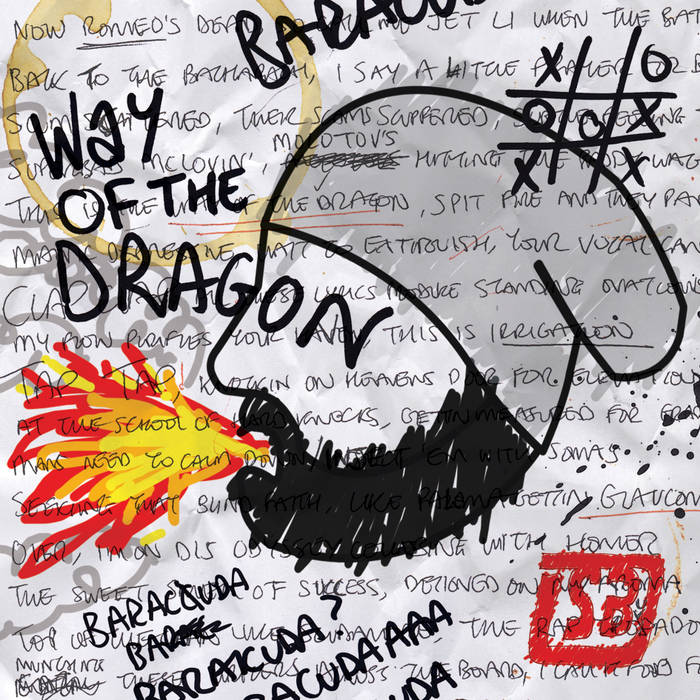 The first track released from the forthcoming 'The Recipe' mixtape, Baracuda goes old-school on this raw rap banger!

flow immaculate, smacking back at the devil's advocate
leaving the stage massacred like Montagues and Capulets
now Romeos dead, so call me Jet Li when the battle's done
Back to the Bacharach, I say a little prayer for battered ones
scum scattered, their scams scuppered, subtle feeling
that Superbad Mclovin, molotovs hitting the paddy wagon
this is the Way of The Dragon, spit fire and they panic
manic depressive, wait to extinguish your vocal cannon
clap clap, all these lyrics produce standing ovations
my flow purifies your haven, this is irrigation
tap tap, knocking on heavens door for elevation
at the school of hard knocks, getting measured for graduation
mans need to calm down, inject 'em with somas
seeking that blind faith, like Paloma getting glaucoma
over, i'm on this odyssey collabing with Homer
the sweet smell of success designed on my aroma
top of the chain like scudamore, the rap troubador
munching these writers across the board, i call it food for thought
i'm drinking holy water through a straw, so if divine intervention
enters my system, its the purest form
the cure for pulling scorn's keeping critics forlorn
the calm before the storm only occurs when i'm on chloroform
oblivious minds get serious, hiding support
watching Furious Styles, a curious child was born
and now the Baracuda's third degree, producing heat
breath control and deeper flow, call it scuba-diving the beat
thats why i'm wavy when the cypher's complete
creativity's vegetated, so i Hyper'd the scene
tight on the mic, i'm a mic titan, iron vice like mike tyson
grimy spitting, filthy bars so i fight Dysons
broken silence, in this landscape of fake screams
smoke drifts across the abyss, when chasing pipe dreams
they spend their life catching up tweets like Sylvester
suffering succotash, when jokers turn into jesters
savage your cartilage, talking bout carving this?
the only shanks you'll ever come across is armitage
cause i'm the flame to the inferno, in your no smoking zone
so the cancer is passive, as i cataclysm the microphone
sacrificial but not a pawn, this rook's riding the storm
my book never ends, the epilogue's torn
my episodes causin epidemics so epic, i'm esoteric
so my shine triggers epilepsy in pathetics
i bless prophetic messages to your mind genetics
so you can envisage the future as a lost relic
never question the top 5 on your rapping lists
I'm 1,2,3 like my time's (sponsored by accurist)
the victory sweeter than saccharin, without no management
acting like wild geese, you chiefs leave me gaggling
a baracuda battering ram on a tangent, these randoms are
gassing themselves, you sound flatulent
i never lived a rock and roll lifestyle
let em eat rolls and throw rocks, my rationale is versatile
walked the green mile, holding the hand of death hard
excellence of execution, cause i'm hitting mans in the heart
killing beats from the start, bribing the witnesses
built foundations on blocks, you fools are just bricking it
i'm actually packing actual facts, natural stacks
you cats manufacture your stats, to earning dap
cease the back chat, after t in the park
see me embark, as my words unlock a key to the dark
side effects, leave the bloodsucker stressed
hustlers becoming customers, when i get possessed
no exorcism, effected by Lynx, they all trying to get next to me
for the taste of victory, I'm giving you The Recipe

Rapper Swami Baracus has been on the music scene for a number of years and has featured on smash hits such as: 'One Blood UK', 'My Shoes', 'Brown Boys' & 'This DJ'. He has previously recorded material with Nutty P, Genesis Elijah, AC, Mic Assassin and General Levy and received substantial airplay from BBC Radio 1, BBC 6 Music (Tom Robinson), BBC 1Xtra, Kiss 100. Nominated for a Britasia TV Award. ... more

Bandcamp Daily  your guide to the world of Bandcamp